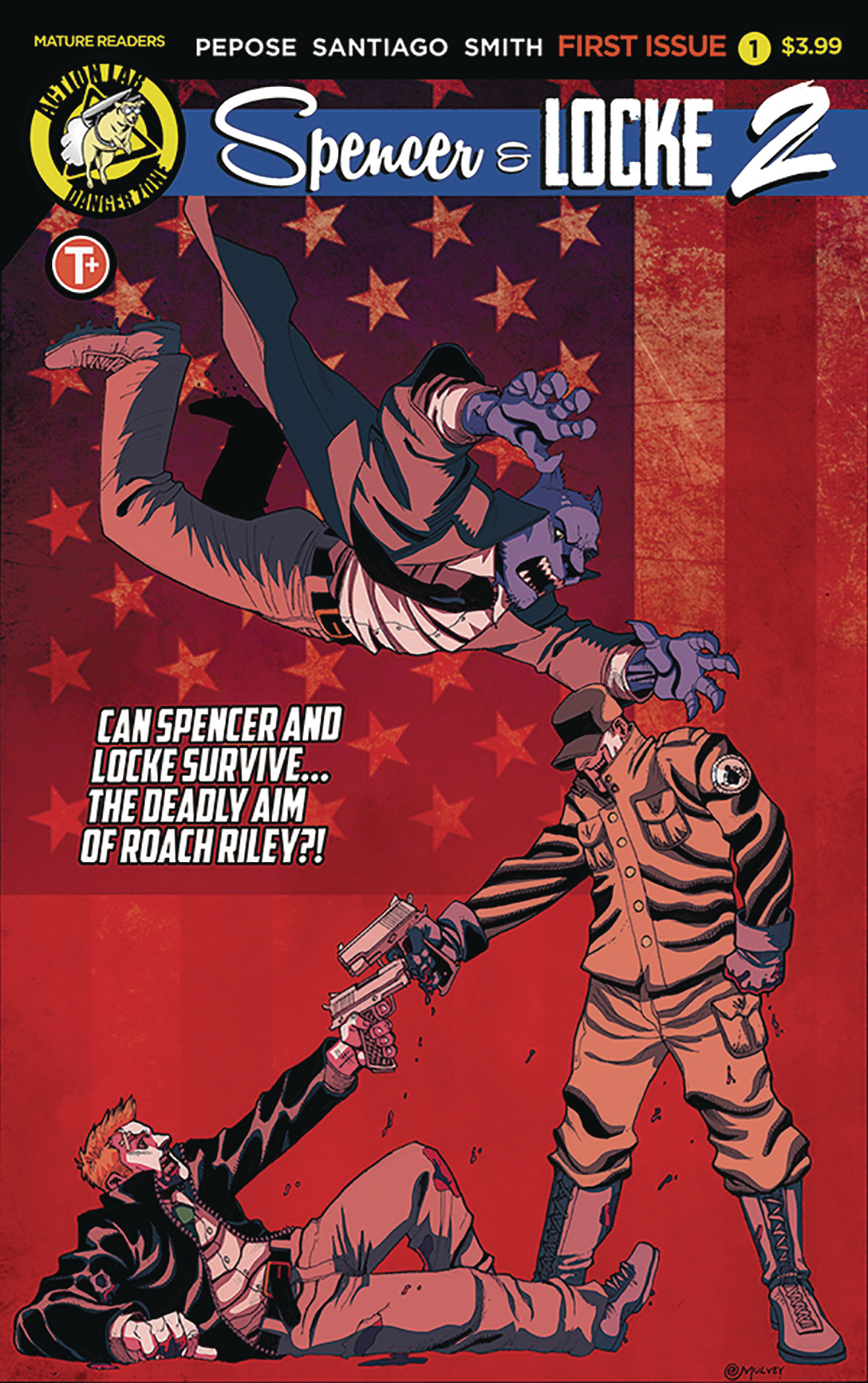 Full disclosure:  I was late to this absolutely wonderful book.  I missed the first go ’round and was told just how horrible of a mistake I’d made by MANY folks.  I’m here to state they all of these MANY folks were absolutely right.  I screwed up.  This “Calvin and Hobbes meets (insert classic noir here)” is a spot on assessment.  That was the common theme and description of the book I kept getting.  Again, spot on.  I discovered so much in this book and am extremely thrilled that I had the chance to preview it.

Sooo yes, it is a Calvin/Hobbes meets classic noir/crime story mash up.  While it would appear that Calvin and Hobbes are all grown up, I got a little something different than that from it.  Yes, that element is there but what this book is delivering is much deeper.  The parallels are incredibly well done and the introduction of Roach Riley (a very on point Beetle Baily analogue) drives home my take from this wonderful book.  Coping and dealing with life, the world, and the road we travel them on is *&%&&%^$ hard.  Taking the grown up version of C/H at face value, we’re getting a very adult take on things.

Spencer isn’t a mere play pal and imaginary friend.  He’s a conscious, an alarm bell, and a partner.  Whether it’s warning or self-assurance, Locke is grown up and he needs both.  From the first volume to this one Locke grows up in the biggest way possible.  He’s a father now.  All of the realities of life can no longer be ignored.  A greater purpose exists now.  As I stated, I missed this on the first go so picking it up with VOL 2 I was worried about needing too much of what came before to truly enjoy (and get) what I was reading.  Not to worry though, as a WONDERFUL use of the 9 panel grid introduces a bevy of information masterfully.  It’s all there and I was caught up.  This divulging of information really made the rest of this issue pop.  Our new bad guy (Roach) is very clearly a mirror of Locke.  The grown up world sucks, shit happens, and you’ve got to deal with it.  The two clearly deal with it in different manners.  The usage of Beetle Bailey for Roach further pushes my take from this book as I stated before.  As with the C/H analogues, our Beetle Bailey character further illustrates how the world we grew up in is much different once we arrive in it as a grown up.  The central theme is trauma.  The trauma of life more specifically.  Locke has had quite a bit of it in his life up to this point.  What’s been introduced with Roach is a very real form of the PTSD that so much of our society either sees, or ignores on a daily basis.  The choice of a Beetle Bailey (military) influenced characters is perfect way to further the exploration of PTSD and the trauma that shapes our lives.

There is plenty of discussion to be had with the central theme of S&L but I want to make sure that the rest of the book is addressed.  At it’s core it is an excellent crime/noir/buddy cop book.  Forget for a moment that he’s imaginary, and Spencer as a character/cop is freaking bad ass.  I wonder though, with how this first issue sets up VOL 2, if maybe he’s going to represent a fracturing of Locke’s psyche?  We’ll see, but Spencer has shown some more overtly animal machinations here at the kick off to this story.  Roach’s character is a direct and blunt force challenge to Locke’s.  Damaged with remnants of childhood still clinging, Roach is absolutely that hard look in the mirror that Locke needs.

The book is flat out gorgeous and the physical/visual components take it to another level.  The different styles of art create a wonderfully brutal “opposite sides of the coin” effect when representing the childish and grown up worlds.  Santiago’s skill and wide range of ability brings the central themes to life on a grand scale.  Smith’s coloring adds the depth and drives home the stark contrast between the two worlds on display.  Topping it off Colin Bell puts the cherry on the top of the characters with the lettering.  The different narration boxes for each are absolutely fantastic.

If you missed the launch of S&L 2 #1 you need to make that right.  Head back to your LCS and nab it.  You’ll be glad you did.