It’s our second edition of I LOVE THESE GUYS!  The first go round came about due to circumstances of the day that I wrote the piece.  I’d been thinking about this particular bit for a while and had decided to go with it but hadn’t really nailed down how I wanted to go about it.  Well, that day saw me have a “b-list” convo on Twitter that included The Shroud, I’d picked up a very high grade issue of Tombstone’s origin, and had a convo at my LCS about the “Superlogues” and who we liked best.  The bit wrote itself.  So here we are with the VOL 2 of ILTG and I decided on using a theme of sorts a I’ve done with the Full Frontal Friday pieces.

So let’s take a look at some JIM STARLIN creations (co-creations) that I love:

While most know him as the movie version this dude was literally an entirely different character when I was growing up.  This guy had power like Thanos, rage like the Hulk, and much more complexity to his character than most probably realize.  Thanos kills him and his family (except his daughter doesn’t die, is taken back to Titan and raised by Kronos, and becomes Moondragon) and he has his spirit salvaged and put into the powerful body he has as Drax.  He had cosmic power levels, stood toe to toe with both Thanos and Captain Marvel, and like Silver Surver didn’t need air/food/water/etc.  While his purpose was to kill Thanos this version of Drax ended up serving a larger purpose with the Infinity Watch.  To me he seemed like a test run for what would eventually be done in Hulk story arcs/directions.  Though I’d argue that having thought your daughter dead, having your memories restored, having to fight her, and having her make your life essence “vacate” your body … is a hell of an ordeal that most characters don’t go through.  The new version of Drax?  Shit.  Absolute garbage.  He’s a glorified pit fighter.  Big deal.  Give me back the cosmic powerhouse.  Sure, you can leave the “slow” bit at the door while keeping the issues surrounding Moonstone’s mental attack and being resurrected.  You can still make the character layers deep with plenty of instability and fine line walking.  I’m ok with that as it’s part of the appeal of the original version.  But give me back the guy in the picture here.  Given that the books (and MCU) are going the expanse is going to get too large for the bare knuckle brute we’ve got currently.  It is set up so well for there to be a “rebirth” of Cosmic level Drax (since we’ll apparently never get the REAL Cpt Marvel). I freaking love this dude. 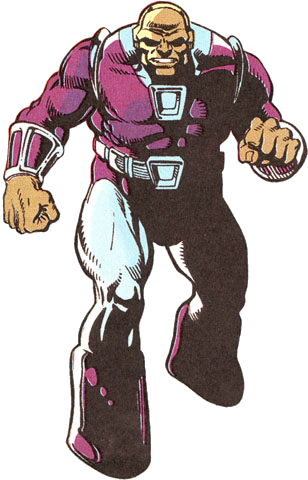 Yeah, Len Wein was behind the character.  Legendary writer conceived him to fight Supes.  Starlin brought him to life along w/Wein’s idea for the character. This guy has had pretty decent runs but honestly should be a very VERY major player in the DC Universe.  He debuted rather boldly by kidnapping Lois, Jimmy, and Clark’s workplace opposite Steve Lombard.  Why?  to get Supes to hand over the key to WarWorld of course.  He needed a new world to rule after revolution ousted him from the world he previously ruled over.  He was literally created to be a physical match/threat to Superman.  Early on he was ruthless (the kidnapping/blackmailing, murdering Starman’s sister and taking his love for his wife to gain the throne, and killing again to gain a Sun-Eater to destroy Earth’s sun just to get back at Supes).  This is a BAD, GUY.  His actions and abilities actually matched the intent.  This is something that (IMO) has been SORELY lacking in DC for most of its existence (at last in my lifetime).  Yet here Mongul sits, the perfect character to beat the good guys over the head with.  I mean he’s stood up against the Justice League AND the Legion of SH!  Yeah sure the whole continuity wipe “erased” these original stories from continuity but they didn’t erase the knowledge of what he was and could be.  Even with the wiping of that badassery he STILL was such a B.A. that an entire planet decided to die of a virus than suffer under his rule.  Yeah.  New 52 comes along and they still have him showing up decapitating someone and hanging his remains up on the wall Predator style.  HE’S RIGHT HERE DC …. USE HIM.  I freaking love this guy. 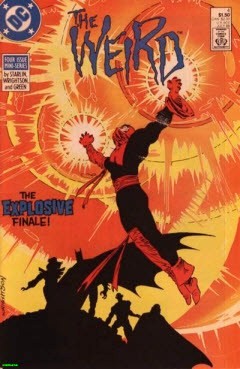 Talk about an appropriate name.  All energy beings are pretty funky as is but this character was given a chance to ‘shine’ so to speak.  Tragic beginnings spark, well, a weird existence.  Being pure energy he was naturally (along with his entire race) enslaved by another race as a power source.  The poor being ends up escaping for help only to take on the physical body of a damned dead guy.  This brings a whole fractured state of mind with bits of his host (the dead Walter Langley) flashing in and out of his psyche.  To top that off freaking Blue Beetle named him.  How can you not already love him?  How about the sympathy card?  His new form was (get this) unstable and he ended up being tossed back out into space to explode … oh Guy f’n Gardner is the one that booted him.  For me I really got into the character in Starlin’s STRANGE ADVENTURES series.  He was on the opposite end of his beginnings as his essence was causing stars to disappear as he “ate” them.  Not fully aware of who/what/how or anything else he’s caught in a … weird … place in a much bigger plot.  Yes, he’s being used again but this time around he’s a force to be reckoned with.  Throughout his existence he’s had a hell of a hard go.  He’s been brought back to life in a … weird … event that ties him to Captain Comet through resurrection (what?).  He’s been essentially the most powerful being in the DCU during the Strange Adventures limited series.  He’s actually really damn powerful (can match Superman’s strength in certain forms).  There’s a lot going on with this character and he sums up the grandiose of Starlin’s ways perfectly.  That’s why I love this guy.