Ok, I give Big Blue a hell of a lot of schtick just about any chance I can I’ve got my reasons for all that BUT that doesn’t mean he’s not iconic and doesn’t deserve the majority of the love and praise he gets.  More so he’s about as picturesque a super-hero as there is.  The Virgin Art Variant puts that on full display:

So we come in hot with one of the variants for an absolute milestone comic issue.  Dell’otto has put together a magnificent cover fitting of the occasion.  This makes me think of Christopher Reeve and the Superman I grew up with.  Symbolic in a way as he sits atop his throne of solitude here, the image captures the juxtaposition of the Superman character.  All powerful and able to do anything yet without a true contemporary there’s isolation with undertandings only he can have.  There are feelings only he can process and mental fights only he can have.  So here he is, ruling over the solitude of being himself.  Regal in a way, evoking his power, but displaying the secluded portion of him that will always be present. 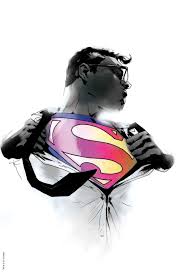 Sometimes the simplest imagery is the best.  Here we have a perfect example of that.  With glasses still on and trademark hair swirl clearly visible, we get that moment.  The feeling of heroism rises, the hope is spread, and the metaphorical beacon of light flashes out from the unassuming everyman.  The SUPERman is emerging and everything will be ok.  This moment is iconic in of itself.  Countless times it has been copied, represented, alluded to, or paid homage to across all sorts of media.  The underlying symbolism of what we’re all capable of and all hold within us was a perfect choice to portray on this issue.
Francesco Mattina

While we all take Superman a bit for granted, in the sense that the majority of our feelings regarding him are from a sense of expectation.  We feel we are owed something from given what he is.  We took him in, we raised him, we gave him what he otherwise never would have had.  This cover by Mattina though, captures the other side of the coin.  While married to the thoughts and processes we know as truth, justice, and the American way … there is an outright power that runs through Supes.  Yes the will to be and do good, the want of decency, and the hope to overcome any situation all drive him.  That raw underlying power coursing through him is what takes these things and uses them as fuel.  The Injustice stories give us a glimpse of what could be if Superman thought and felt differently.  What potentially lies underneath and how strong it is is perfectly captured.